Since corporations are at the center of  many of the world’s  most serious public health crises, improvements in health require more focus on the harmful practices of global corporations.   In an interview with Corporate Crime Reporter, a newsletter for those concerned about corporate crime, Corporations and Health Watch’s Nicholas Freudenberg explained the rationale for this approach to public health. In decent societies, Freudenberg said, healthy choices ought to be easy choices.

END_OF_DOCUMENT_TOKEN_TO_BE_REPLACED 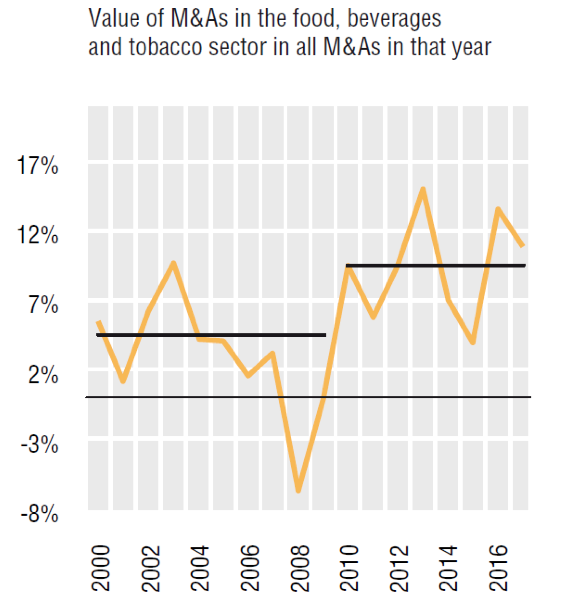 In the past, the role of global capital flows for health has not been considered in the debate about key risk factors of Noncommunicable Diseases (NCDs). This is a blind spot in public health. A significant share of the global food and beverage industry is owned by institutional investors. Cross-border mergers and acquisition volumes in the food, beverage, and tobacco industries have substantially increased. Progress on preventing and controlling NCDs requires the public health community to engage in a forward-looking discussion to address investors’ responsibility in relation to global health in general and the tsunami of NCDs in particular.

Nicholas Freudenberg speaks on corporations and health at DeBalie, a public lecture hall in Amsterdam.

In both Europe and the United States, public health regulation is under attack.  Despite the Volkswagen Dieselgate emission cheating scandal, the European Union has not yet developed guidelines to prevent future cheating.  Monsanto continues to block stronger regulation of glycophates in Europe and North America. In the United States, President Trump and the Republican Congress are slashing funding and rescinding public health regulations at several federal agencies.  Can public health professionals and advocates in  two of the world’s largest markets join forces to resist these trends?

At a recent series of lectures in Brussels, Amsterdam and The Hague, Nicholas Freudenberg, Distinguished Professor of Public Health at the City University of New York School of Public Health and author of Lethal but Legal: Corporations, Consumption and Public Health examined some of the issues confronting those seeking to reduce corporate practices that harm health.  In his lectures, he suggested five broad goals for a transatlantic agenda to protect public health against corporate efforts to roll back regulations.  These included:

The lecture and trip was sponsored by Wemos Foundation, a Dutch global health foundation, the European Public Health Alliance and Corporate Europe Observatory, timed to coincide with the translation of Freudenberg’s book into Dutch, Legaal Maar Fataal. Each of these organizations provides useful resources for North American public health professionals who want to better understand recent developments in Europe.

The Wemos Foundation, for example,  sponsored a forum on the interactions between the European Medicines Agency (EMA) and the pharmaceutical industry and explored strategies for reducing conflicts of interest.  A summary of the event is available here.

The Corporate Europe Observatoryis a research and campaign group working to expose and challenge the privileged access and influence enjoyed by corporations and their lobby groups in EU policy making.

For public health advocates in the United States, these organizations and their reports can be useful resources for developing strategies to resist deregulation and reduced enforcement.  “As the U.S.  government dismantles the public health regulatory agencies developed over the last 50 years,” said Freudenberg, “researchers need to document the impact of these changes and develop new strategies to protect public health.  By partnering with European scientists and advocates, we can accelerate this process.” 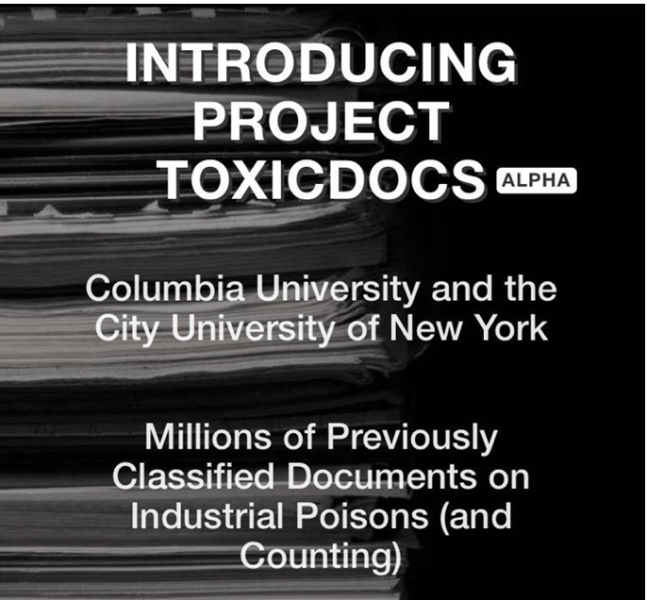 ToxicDocs is a new resource for journalists, researchers, community groups, unions, and others who investigate the harmful consequences of industries that use toxic substances. The free and open-to-the public site is a searchable repository of twenty million pages of documents, with more to be posted in the future.  The documents have been retrieved from public archives and private communications that have become open to the public in lawsuit “discovery”. Created by two public health historians, Gerald Markowitz of City University of New York and David Rosner of Columbia University and their colleague Merlin Chowkwanyun, the site promises “blazingly fast searches of once-secret industry documents.”

Now in a special issue, the Journal of Public Health Policy, available free and online, presents several commentaries , including one by the site’s founders Rosner, Markowitz and Chowkwanyun , on the history and use of ToxicDocs.  In addition:

Stéphane Horel of LeMonde, who has already used many documents that will be in ToxicDocs.org describes the difference such data make for investigative journalists.

Christer Hogstedt (from Sweden) and David Wegman (US) explore the role that ToxicDocs may play in environmental protection.

Jock McCullogh from South Africa explains the role that previously secret documents can play in protecting gold and asbestos miners.

US Senator Sheldon Whitehouse, who used these documents when he was Attorney General for Rhode Island writes about ToxicDocs in the public sphere.

Robert Proctor tells the early history, starting with tobacco litigation, and how it has changed our ideas of progress in public health.

and Corporation and Health Watch’s Nicholas Freudenberg argues that ToxicDocs provides a new tool for researchers and advocates, a new approach to teaching public health, and adds to the growing number of resources available to investigate the role of corporations in shaping patterns of health and disease and public health policy.

Why is the National Rifle Association so powerful?  asks The Guardian in an in-depth analysis of the political role of the NRA in resisting efforts to reduce gun violence.  Here’s a clue: it’s not (just) about the money.  The vast majority of Americans support gun control, and yet Congress has failed to toughen laws even in the wake of a series of mass shootings. With the NRA pouring money into political races at record levels it is an easy argument to make that the gun lobby has bought Washington – but that fails to paint a full picture… “The NRA has money that it uses to help its favored candidates get elected. But the real source of its power, I believe, comes from voters,” said Adam Winkler, professor of constitutional law at the UCLA School of Law and author of Gunfight: The Battle over the Right to Bear Arms in America.  By choosing its battles wisely, the NRA has shown an ability to swing primary elections in favor of pro-gun candidates, Winkler said. “That’s the real source of their strength,” he said. That and its use of a relatively small number of highly motivated people to push an agenda that appears out of step with the general population, which, according to recent polling, is in favor of stricter gun laws.

Corporations use a range of strategies to dispute their role in causing public health harms and to limit the scope of effective public health interventions.  This study analyzed alcohol, food, soda and gambling industry documents and websites and minutes of reports of relevant health select committees, using standard document analysis methods.  Two main framings were identified: (i) these industries argue that aetiology is complex, so individual products cannot be blamed; and (ii) they argue that population health measures are ‘too simple’ to address complex public health problems. However, in this second framing, there are inherent contradictions in how industry used ‘complexity’, as their alternative solutions are generally not, in themselves, complex.  Corporate arguments and language may reflect the existence of a cross-industry ‘playbook’, whose use results in the undermining of effective public health policies – in particular the undermining of effective regulation of profitable industry activities that are harmful to the public’s health.

The local chamber of commerce is usually a reliable ally in battles against regulation. But when it comes to smoking rules, many business groups have decided they would rather switch than fight, reports Reuters. Even in states where tobacco has played an important role in the economy—including North Carolina, Kentucky and Missouri—chambers have endorsed cigarette tax hikes, raising the smoking age and other efforts to curb tobacco habits. The shift has accelerated since 2016, driven by a growing awareness that smoking drives up healthcare costs for employers, business groups said. Smoking restrictions often are part of broader wellness initiatives, such as promoting exercise and nutrition, aimed at improving health—and business. “Smoking isn’t just killing us, it’s bankrupting us,” said Ashli Watts, a spokeswoman with the Chamber of Commerce for Kentucky, where one in four adults uses tobacco, the lung cancer rate is the nation’s highest and related healthcare and lost productivity costs nearly $5 billion a year. “Companies do look at the health of a workforce,” Watts said. An unhealthy workforce “is a deterrent.” 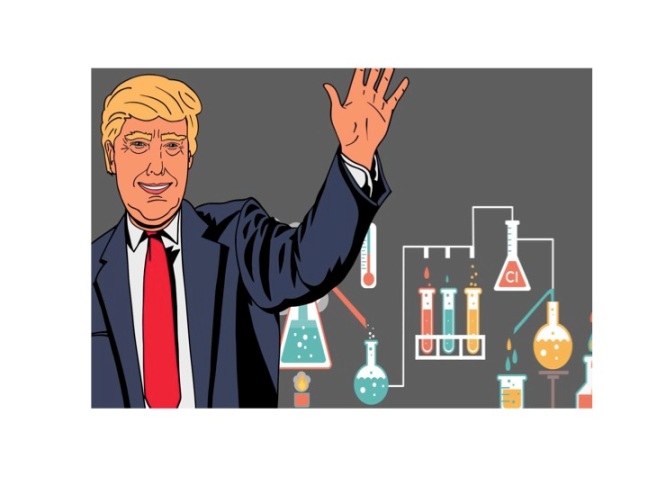 President Trump met with leaders of some of the world’s biggest pharmaceutical companies Tuesday and emphasized the need to lower “astronomical” drug prices, decrease regulations and bring more drug manufacturing into the United States, reports The Washington Post. Trump offered no specific policies, but mentioned increasing competition and “bidding wars” as a way to bring down prices. In the past, he has lashed out at the pharmaceutical industry for “getting away with murder” and threatened to use the government’s bargaining power to force down drug prices for programs like Medicare.

In a response to this proposal, Michael Carome, Director of Public Citizen’s Health Research Group wrote:

President Donald Trump’s preposterous promise to pharmaceutical company CEOs to slash U.S. Food and Drug Administration (FDA) regulations by 75 to 80 percent would, if fulfilled, fundamentally destroy the ability of the agency to protect patients and consumers from unsafe or ineffective medications and medical devices, hazardous foods and dietary supplements, and dangerous tobacco products, among other things. The end result would be countless preventable deaths, injuries and illnesses across the U.S. Trump’s horrifying proposal reflects utter ignorance about the FDA’s essential role in protecting public health and once again demonstrates his commitment to placing corporate profits above protecting the safety of the American people.

The beverage giants Coca-Cola and PepsiCo have given millions of dollars to nearly 100 prominent health groups in recent years, reports The New York Times, while simultaneously spending millions to defeat public health legislation that would reduce Americans’ soda intake, according to public health researchers. The Times story is based on a new report in the American Journal of Preventive Medicine.

That study “investigates the nature, extent, and implications of soda company sponsorship of U.S. health and medical organizations, as well as corporate lobbying expenditures on soda- or nutrition-related public health legislation from 2011 to 2015… From 2011 to 2015, the Coca-Cola Company and PepsiCo were found to sponsor a total of 96 national health organizations, including many medical and public health institutions whose specific missions include fighting the obesity epidemic.

END_OF_DOCUMENT_TOKEN_TO_BE_REPLACED

A study published in the Proceedings of the National Academy of Sciences asks what can be done to reduce unhealthy eating among adolescents. Researchers hypothesized that aligning healthy eating with important and widely shared adolescent values would produce the needed motivation. A double-blind, randomized, placebo-controlled experiment with eighth graders evaluated the impact of a treatment that framed healthy eating as consistent with the adolescent values of autonomy from adult control and the pursuit of social justice. Healthy eating was suggested as a way to take a stand against manipulative and unfair practices of the food industry, such as engineering junk food to make it addictive and marketing it to young children.