Friends of the Earth Europe 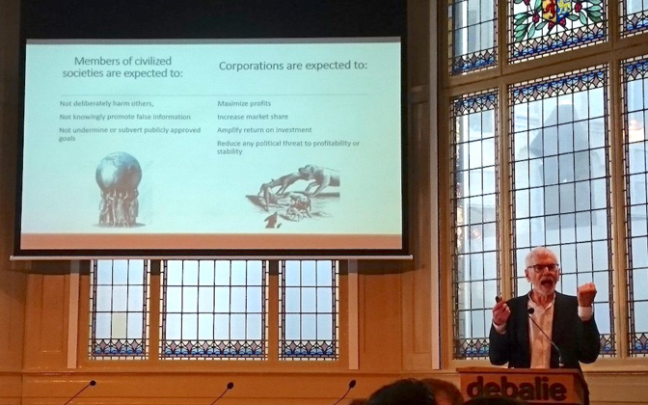 Nicholas Freudenberg speaks on corporations and health at DeBalie, a public lecture hall in Amsterdam.

In both Europe and the United States, public health regulation is under attack.  Despite the Volkswagen Dieselgate emission cheating scandal, the European Union has not yet developed guidelines to prevent future cheating.  Monsanto continues to block stronger regulation of glycophates in Europe and North America. In the United States, President Trump and the Republican Congress are slashing funding and rescinding public health regulations at several federal agencies.  Can public health professionals and advocates in  two of the world’s largest markets join forces to resist these trends?

At a recent series of lectures in Brussels, Amsterdam and The Hague, Nicholas Freudenberg, Distinguished Professor of Public Health at the City University of New York School of Public Health and author of Lethal but Legal: Corporations, Consumption and Public Health examined some of the issues confronting those seeking to reduce corporate practices that harm health.  In his lectures, he suggested five broad goals for a transatlantic agenda to protect public health against corporate efforts to roll back regulations.  These included:

The lecture and trip was sponsored by Wemos Foundation, a Dutch global health foundation, the European Public Health Alliance and Corporate Europe Observatory, timed to coincide with the translation of Freudenberg’s book into Dutch, Legaal Maar Fataal. Each of these organizations provides useful resources for North American public health professionals who want to better understand recent developments in Europe.

The Wemos Foundation, for example,  sponsored a forum on the interactions between the European Medicines Agency (EMA) and the pharmaceutical industry and explored strategies for reducing conflicts of interest.  A summary of the event is available here.

The Corporate Europe Observatoryis a research and campaign group working to expose and challenge the privileged access and influence enjoyed by corporations and their lobby groups in EU policy making.

For public health advocates in the United States, these organizations and their reports can be useful resources for developing strategies to resist deregulation and reduced enforcement.  “As the U.S.  government dismantles the public health regulatory agencies developed over the last 50 years,” said Freudenberg, “researchers need to document the impact of these changes and develop new strategies to protect public health.  By partnering with European scientists and advocates, we can accelerate this process.”