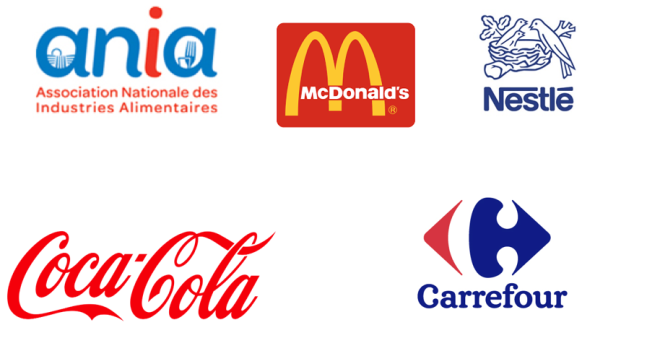 A new study in  Public Health Nutrition  analyzed the corporate political activity (CPA) of major food industry actors in France. The  analysis shows that the main practices used by Coca-Cola and McDonald’s were the framing of diet and public health issues in ways favorable to the company, and their involvement in the community. The French National Association of Agribusiness Industries primarily used the ‘information and messaging’ strategy (e.g. by promoting deregulation and shaping the evidence base on diet- and public health-related issues), as well as the ‘policy substitution’ strategy. Nestlé framed diet and public health issues and shaped the evidence based on diet- and public health-related issues. Carrefour particularly sought involvement in the community. The authors found that, in 2015, the food industry in France was using CPA practices that were also used by other industries in the past, such as the tobacco and alcohol industries. Because most, if not all, of these practices proved detrimental to public health when used by the tobacco industry, we propose that the precautionary principle should guide decisions when engaging or interacting with the food industry.

Statements on conflicts of interest provide important information for readers of scientific papers, write David Stuckler, Gary Ruskin and Martin McKee in the Journal of Public Health Policy in a case study of emails exchanged between Coca-Cola and the principal investigators of the International Study of Childhood Obesity, Lifestyle and the Environment. There is now compelling evidence from several fields that papers reporting funding from organizations that have an interest in the results often generate different findings from those that do not report such funding. The authors describe the findings of an analysis of correspondence between representatives of a major soft drinks company and scientists researching childhood obesity. Although the studies report no influence by the funder, the correspondence describes detailed exchanges on the study design, presentation of results and acknowledgement of funding. This raises important questions about the meaning of standard statements on conflicts of interest.

According to The Sydney Morning Herald, Coca-Cola has been exposed as having a secret plan to monitor research at Sydney University that examines how private companies influence public health outcomes in areas such as obesity. In a leaked internal email, a paid consultant to Coca-Cola South Pacific writes that a “key action” for the global soft-drinks manufacturer is to “monitor research project outcomes through CPC [Charles Perkins Centre] linked to Lisa Bero’s projects”. Professor Lisa Bero has been targeted for “monitoring” by Coca-Cola for her research on nutrition and bias.

The beverage giants Coca-Cola and PepsiCo have given millions of dollars to nearly 100 prominent health groups in recent years, reports The New York Times, while simultaneously spending millions to defeat public health legislation that would reduce Americans’ soda intake, according to public health researchers. The Times story is based on a new report in the American Journal of Preventive Medicine.

That study “investigates the nature, extent, and implications of soda company sponsorship of U.S. health and medical organizations, as well as corporate lobbying expenditures on soda- or nutrition-related public health legislation from 2011 to 2015… From 2011 to 2015, the Coca-Cola Company and PepsiCo were found to sponsor a total of 96 national health organizations, including many medical and public health institutions whose specific missions include fighting the obesity epidemic.

END_OF_DOCUMENT_TOKEN_TO_BE_REPLACED

A new report from the Center for Science in the Public Interest shows how two major global soft-drink producers, Coca-Cola and PepsiCo, have sought to maintain their profits in the face of declining sales in wealthier countries by, like the tobacco industry, investing heavily in low- and middle-income countries. Thus, both companies, as well as other multinational and local beverage producers, are spending several billion dollars a year in such countries as Brazil, China, India, and Mexico to build bottling plants, create distribution networks, and advertise their products to maximize sales.

END_OF_DOCUMENT_TOKEN_TO_BE_REPLACED

During the investigation and subsequent subsequent collapse of the Coca-Cola Global Energy Balance Network, the New York Times and Associated Press discovered that prominent university professors working on obesity issues had been funded by The Coca-Cola Company. This is not just a public health scandal.  It is a journalistic one as well, writes Gary Ruskin on Alternet.

by Faith Boninger and Alex Molnar

Cross-posted from The Conversation

Students are greeted these days with a barrage of marketing and advertising as they enter the school year. And there is no let-up. The ads are all over.

The US Government Accountability Office (GAO) found ads in corridors, on scoreboards and vending machines, and inserted in the curricula through supplementary educational materials. They were on school equipment (eg, uniforms, cups, water coolers, beverage cases, food display racks) and on school buses. Ads were also put out through school newspapers, yearbooks and the school radio stations.

END_OF_DOCUMENT_TOKEN_TO_BE_REPLACED

Coca-Cola, the world’s largest maker of sugary beverages, has spent almost $120 million in the past five years to pay for academic health research, partnerships with major medical groups and community fitness programs aimed at curbing the obesity epidemic, reports the New York Times.

END_OF_DOCUMENT_TOKEN_TO_BE_REPLACED

Eight years ago, I wrote in CHW about how and why corporations buy scientists to advance their business goals.   Sadly, the problem continues. This week the New York Times published a story on how Coca Cola has funded researchers at the University of South Carolina, the University of Colorado and the West Virginia University to make the case that exercise, not reduced consumption of sugary beverages, is the solution to obesity. Coke has also funded the Global Energy Balance Network, a nonprofit network of the researchers it funds, to advance this argument more widely.