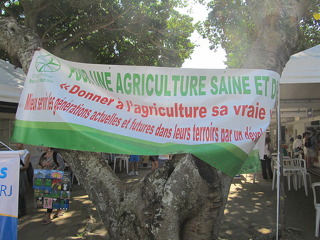 For public health advocates, the Rio+20 environmental summit last week was an important opportunity to connect better health with sustainability.  The government negotiators from 188 nations and the thousands of activists from around the world who attended the three-day meeting went home with mixed reviews of their success in moving towards “the future we want,” the conference slogan.

The Director-General of the World Health Organization (WHO), Dr. Margaret Chan, called Rio+20 a “victory for health” and said of the final report: “This focus on the links between health and sustainable development is critical. Healthy people are better able to learn, be productive and contribute to their communities. At the same time, a healthy environment is a prerequisite for good health.”  Chan also released a new WHO report, Our Planet, Our Health, Our Future. Human Health and the Rio Conventions: Biological Diversity, Climate Change and Desertification, that describes the links between health and sustainable development. Many nations made commitments for future action or financial support. For instance, the United States agreed to partner with more than 400 companies, including Wal-Mart, Coca-Cola and Unilever, to support their efforts to eliminate deforestation from their supply chains by 2020.

On a more negative note, Greenpeace executive director, Kumi Naidoo, said that, “Rio+20 has been a failure of epic proportions. We must now work together to form a movement to tackle the equity, ecology and economic crises being forced on our children. The only outcome of this summit is justifiable anger, an anger that we must turn into creative, thoughtful and meaningful action.” A coalition of NGOs wrote of their opposition to the final agreement, “The Future We Want is not to be found in the document that bears this name. The Future We Want is not what resulted from the Rio +20 negotiation process. The future that we want has commitment and action, not just promises. It has the urgency needed to reverse the social, environmental and economic crisis, not postpone it. It has cooperation and is in tune with civil society and its aspirations, and not just the comfortable position of governments.”

In my post on Rio+20 last week, I wrote that creating a healthier, more sustainable future will require a willingness to reconsider the role of multinational corporations in today’s world. At first read, the final summit document The Future We Want didn’t provide much hope on this front.  It did, however, address non-communicable diseases directly, an improvement over earlier drafts.

But while the 53 page report used the words “health” or “healthy” 54 times, it used the term “business” only eight times and the words “corporation” or “corporate” only twice. When business was mentioned, it was described as one more partner in global alliances for sustainability. Yet as I noted last week, the Third World Network, an NGO in Malaysia, said in their Rio+20 briefing paper, “If governments want to enable sustainable development, then they must regulate transnational corporations who are drivers of unsustainable development.” As at so many global conferences, multinational corporations remained largely invisible in Rio, immune from the scrutiny needed to reform their unsustainable and unhealthy practices.

One way that environmental and public health activists can move from speeches into action is to identify the specific ways that corporations undermine the environment and health. A good place to start might be to focus on the role of Big Agriculture and Big Food in contributing to human induced climate change and the rise of NCDs.  In a new series on Big Food and Health PLoS Medicine is publishing several articles that outline the health side of the challenge. An introductory editorial notes that “big multinational food companies control what people everywhere eat, resulting in a stark and sick irony: one billion people on the planet are hungry while two billion are obese or overweight.” A recent article in Lancet describes some of the environmental consequences of Big Agricultural practices and a recent report by Deutsche Bank estimates that agriculture accounts for 25 percent of greenhouse gases. What might be the common goals that could bring activists in these two sectors together?  Here are some suggestions for starting points:

2.  Restrict advertising and promotion of unhealthy products such as fast food, sugar-sweetened beverages and processed snacks.

3.  Challenge companies that use philanthropic support of environmentalism and sustainability (e.g., Pepsi, Coke and Dr. Pepper, as described in one of the PLoS Big Food articles) to achieve “innocence by association” and to divert attention from their other harmful practices.

4.  Protect science and universities from corporate penetration and establish standards of integrity that prevent corporations from using science and scientists to defend their harmful practices and deliberately create doubt to thwart public health policy. (For a useful description, see the Union of Concerned Scientists report  Smoke, Mirrors & Hot Air.)

5. Affirm the precautionary principal (that requires products or corporate practices to be demonstrated to be safe before widespread dissemination) as a way of protecting public health and the environment.

6. Strengthen agricultural and food trade agreements to protect health and the environment.

Already environmental and public health activists around the world are working on each of these goals.  By developing a global common agenda and bringing together activists, scientists, local and national governments and local, national and global NGOs, we can begin to create the world we want for our children and grandchildren.