In its annual Good Governance report, writes Fair Observer, the Institute of Directors  assesses the United Kingdom’s largest listed companies against indicators that include board effectiveness, audit and risk accountability, remuneration, shareholder relations and stakeholder relations. Ironically, the IoD index’s top performers often come from the alcohol and tobacco industries. This year’s report gave pride of place to the distiller Diageo and the 2016 winner was British American Tobacco (BAT). The IoD’s standards may be appropriate for how these companies behave in London. In Kinshasa, Kampala and Juba, though, the praise of BAT surely raises eyebrows. As the rest of the world has learned over the intervening months, above-board corporate behavior in the UK does not guarantee ethical conduct elsewhere. Over the summer, The Guardian revealed in a series of explosive investigative pieces that BAT (as well as other multinational tobacco firms) has been ruthless in staking out market share and seeing off health regulations in African markets. BAT and its allies have threatened governments in some eight African countries to counteract policies that have underpinned public health initiatives in Western markets.

Ten years ago, writes Kelly Henning from the Bloomberg Philanthropies Public Health program in the Health Affairs blog, the world was a different place when it came to tobacco. Fewer than twenty developing countries in the world had even one strong tobacco control policy in place. The tobacco industry was beginning an aggressive ramping up of nefarious activities to grow their market share in vulnerable developing countries. And although advocates for tobacco control measures had a major public health victory in passing the Framework Convention on Tobacco Control, the world’s first public health treaty, little financial or technical help was available to support countries that wanted to put life-saving, proven tobacco control policies in place. Early in 2007, the tobacco control landscape was changed dramatically when Michael R. Bloomberg, then in his second term as mayor of the City of New York, donated $125 million through his foundation, Bloomberg Philanthropies, for a two-year commitment to reducing global tobacco use. Now ten years and a total of $600 million later, Bloomberg recently committed another $360 million over six years to this life-saving work, bringing his total financial commitment to nearly $1 billion. In that time, nearly 100 countries worldwide with a total of more than four billion people have passed at least one strong tobacco control law—and fifty-nine of these countries with nearly 3.5 billion people have received Bloomberg support.

The Centers for Disease Control and Prevention reported this month that the adult smoking rate in the United States has fallen to a new low, a testament to the decades of education about the dangers of tobacco and measures to discourage its use. But, warns an editorial in the New York Times, now Republicans in the House are seeking to slash the very government programs that have helped to achieve such remarkable success. 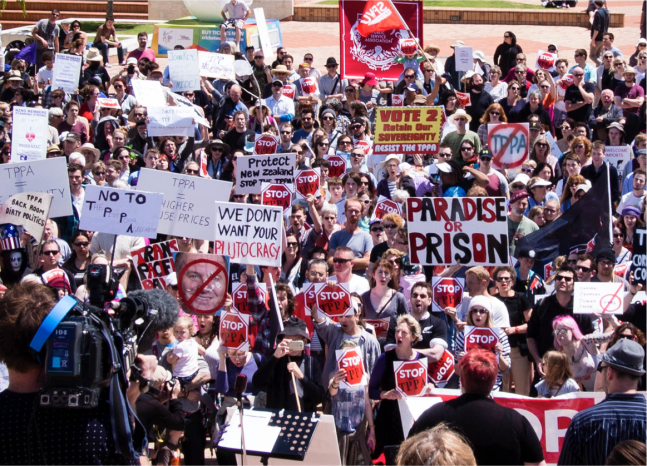 The vacuous “tobacco control” provision in the Trans Pacific Partnership (TPP) virtually capitulates to the demands of multinational tobacco corporations, jeopardizing nations’ health and economic welfare.  Public health and medical advocates in the U.S. and abroad consistently urged negotiators to exclude tobacco control protections from trade challenges under the TPP.  But tobacco industry opposition won the day, bolstered by corporate allies concerned that addressing the uniquely lethal effects of tobacco in trade agreements could set a precedent for reining in their own practices.

END_OF_DOCUMENT_TOKEN_TO_BE_REPLACED

“… the forces of power, particularly corporate power, are impatient with what is adequate for a coherent community. Because power gains so little from community in the short run, it does not hesitate to destroy community for the long run.” ― Wes Jackson, Becoming Native to This Place

In case you had been asleep for the last ten days, last week in New York the UN finally ratified the Sustainable Development Goals (SDGs) aiming to end poverty, protect the planet, and ensure prosperity for all.

END_OF_DOCUMENT_TOKEN_TO_BE_REPLACED

A new study in the American Journal of Public Health describes attempts by the tobacco industry to reinterpret Islamic teaching to make smoking acceptable to Muslims and to help develop markets in countries with large Muslim populations. Tobacco companies have perceived Islam as a threat to its attempts to sell more tobacco products in emerging markets in Asia.