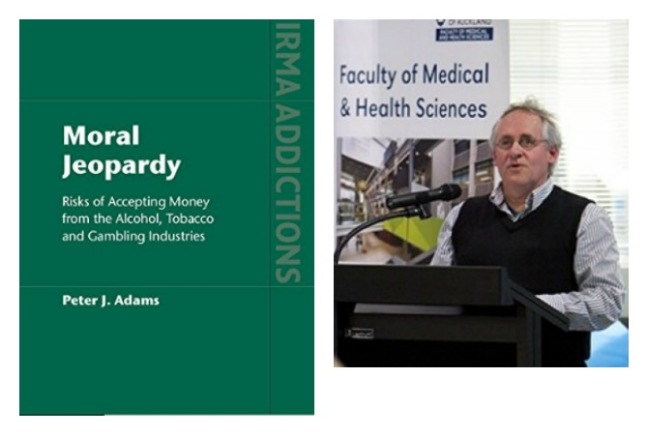 In his new book, Moral Jeopardy: Risks of Accepting Money from the Alcohol, Tobacco and Gambling Industries (Cambridge University Press, 2016), Peter Adams examines the ethical issues that arise when people and organizations accept money from tobacco, alcohol and gambling corporations.  Adams is professor and deputy head of the School of Population Health at the University of Auckland in New Zealand and an associate director of its Centre for Addiction Research.  Corporations and Health Watch’s Nick Freudenberg conducted this e-mail interview of Adams.

CHW: Our readers are familiar with the tobacco and alcohol industries but I think know less about the gambling sector.  Can you briefly describe the global gambling industry?  Who are the key players in this industry?

Adams:As little as thirty years ago gambling in most countries was a cottage industry involving low potency forms of gambling, such as horse racing and bingo, often run as small-scale local operations. Globally this scene has been transformed in an industrial revolution that has witnessed widespread distribution of high intensity and commercialized gambling operations such as large casinos and national lotteries. At the vanguard of this expansion has been the electronic gambling machine (EGM), a product with refined addictive potential that can be placed in many different types of venues such as bars, casinos and shopping malls. EGMs have facilitated the commercial expansion of the gambling industry and with it the profits have rocketed, enabling larger corporations to buy up smaller companies and to expand in size and to consolidate their influence with governments.

Interestingly, governments in most countries tend to play an active role in the industry, often having a large stake in lotteries, track betting and even casinos and EGM venues. Government participation blurs their role with the gambling industry and creates unmanageable conflicts of interest that jeopardize their duty of care in protecting the public.

CHW:  In your book, you describe some of the connections between the gambling industry and the tobacco and alcohol industries.  How do these industries work together?  What do they have in common and how do they differ?

Adams: The industries share a pecuniary interest in the inflated profits that can be made from problem or addicted consumers. Not that problem or addicted consumers are necessarily any more numerous than ordinary consumers, but their excess consumption means they spend considerably more money and are, therefore, responsible for a larger proportion of the profits. This add-on money enables these industries to invest in activities aimed at either promoting further consumption or protecting their profits from policy and legislative reforms.

But they cannot achieve either of these on their own. People would see it as far too exploitative for them to attempt to directly influence policy. Instead, they require the services of other people to enable and facilitate the channels through which they exert influence on policy makers. Gambling corporations have learned from their cousins in tobacco and alcohol to enlist a long line of intermediaries which include commercial organizations (e.g. public relations, lobbying and advertising firms) public good agencies (e.g., health services, charities and community groups) and knowledge generators (e.g., researchers, universities and knowledge communicators). While gambling adopts many of the same tactics as the other industries, it differs in its more recent development, greater current public naivety regarding the harms and its capacity to generate larger profits.

CHW: What led you to publish this book now?

Adams: I began my career as a clinical psychologist working with individuals and families affected by addictions. The widespread misery I encountered prompted me to ask whether there were strategies other than treatment that could reduce this suffering.  I turned to public health approaches with the hope of finding ways of for reducing harm in whole populations. What I then found was that despite the quality of the evidence, and often despite widespread public concern, governments consistently preferred less effective approaches (such as school education and behavior change) over more effective approaches (such as price and availability). For them the goal of appearing to reduce harm seemed more important than actually reducing it. It seemed to me that something was missing. We needed to take seriously the task of understanding the behavior of these industries and the mechanisms they use to influence policy makers.

CHW: What’s the policy agenda of the gambling industry?  How do they advance that agenda?

Adams: The gambling industry has followed the example of both the tobacco and alcohol industries in building up chains of influence with policy makers. The book identifies three chains of influence: the ‘political’, ‘public good’ and ‘knowledge’ chains. The links along the political chain include local and global corporations (e.g., casinos and EGM manufacturers), their various trade associations (e.g., casino associations), and public relations firms and lobbyists, who work together in building relationships with political actors. This is made easier in many countries where gambling corporations are either fully or partially state owned. The links along the public good chain target the hearts and minds of the public through activities that present them as good corporate citizens who are doing something about the harmful ‘side effects’ of gambling.

They also serve to actively divert attention away from structural and industrial considerations and download responsibility onto consumers. The links on this chain include their own corporate social responsibility programs (e.g., donations to aid programs), their funding of third party organizations delivering individual-oriented initiatives (e.g., education and youth programs) and their direct contributions to community organizations (e.g., high profile arts or sports events). The links along the knowledge chain primarily target the funding of researchers in ways that ensure their efforts focus on industry-friendly research (e.g. treatment and populations surveys) rather than focusing on consumption drivers (e.g., social and economic impacts and product design).

CHW: In your view, what are some of the ways public health researchers, practitioners and advocates can limit the public health harm from the gambling industry?  What campaigns or policies have been most effective?

Adams: The widespread acceptance of industry money with little regard for the broader consequences has become a normalized practice in relation to gambling. This has been enabled by the increasing availability of money, the lack of visibility of those who take it and attitudes that minimize, isolate and ridicule those raising concerns (e.g., ‘nanny state’, ‘spoil sports’). As happened with tobacco, change will require a steady rise in people’s awareness of the links between their share in the profits and the harm. The book examines several strategies that could help including: web-based systems that monitor acceptance of industry money, workshops for organizations on moral jeopardy and position statements adopted by organizations, governments or global agencies on the ethics of receiving such money.

CHW:  In your book, you write that the gambling industry has thoroughly captured the knowledge base of the health and social consequences of gambling.  What is the public health research agenda on this industry?  Who is doing that research now?

Adams:The acceptance of industry money by researchers is commonplace and most of the leading researchers in the field have track records in accepting money either directly or indirectly from industry (through consumption levies and other mechanisms). The conflicts of interest now inherent in the research mean we have very little we can rely on in terms of guiding us on effective ways to reduce harm. Moreover, government agencies are typically complicit in enabling these arrangements and in opening up channels whereby industry can influence what gets researched. To change this is a big task that would need to be tackled at several fronts. First, researchers will need to make a stand on the acceptability of industry funded research. Second, robust systems are required for monitoring direct and indirect connections between researchers and industry. Third, governments would need to separate their own interests in gambling from their control of research agendas. They could also assist by funding research from their consolidated funds and not through ring-fenced levies. Lastly, science bodies and global organizations (such as WHO and the UN) could play an active role in promoting integrity in gambling research.