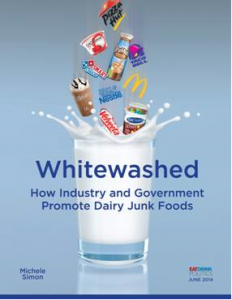 The United States is in the midst of a public health epidemic due to poor diet. While much of the focus has been on obvious culprits such as sugary soft drinks and fast food, dairy foods often get a pass. The dairy industry, propped up by government, has convinced us of the health benefits of milk and other dairy products. But the context of how people consume dairy matters. This report shines a light on the shifting patterns of consumption away from plain milk toward dairy products laden with sugar, fat, and salt.

• About half of all milk is consumed either as flavored milk, with cereal, or in a drink

• Nearly half of the milk supply goes to make about 9 billion pounds of cheese and 1.5 billion gallons of frozen desserts–two-thirds of which is ice cream

• USDA employees attend checkoff meetings, monitor activities, and are responsible for evaluation of the programs

• Checkoff money is not supposed to be used for lobbying but USDA gave $2.1 million to the U.S. Dairy Export Council, which lobbies for dairy products overseas

• The U.S. Supreme Court has upheld the legality of the checkoff programs as “government speech”, finding: “the message … is controlled by the Federal Government”

Fast Food Promotion Despite Checkoff Being for “Generic” Marketing

• Between 2009 and 2011, Dominos benefitted from a $35 million partnership with the dairy checkoff program, resulting in the company adding more cheese, with other pizza makers following their lead

• Domino’s “Smart Slice” program brought the pizza to more than 2,000 schools in 2011, with help from the checkoff program

• 70 percent of milk consumed in schools is flavored

• “Cheese can fit into almost any eating plan”

• “Process cheese is made from natural cheese”

• “Studies show that when chocolate milk is not an option in the school meal line, many kids don’t drink any milk at all. That means they completely miss out on essential nutrients they need to think, learn and grow”

• “Chocolate milk is the perfect balance of vitamins, minerals, carbohydrates and protein—a combination that can’t be found in any other beverage”

• “What’s more important: a small amount of added sugar, or missing out completely on a powerful package of nutrients?”

The federal government should stop mandatory assessments of the dairy industry and put an end to the dairy checkoff program. At a minimum:

3) Checkoff funding should not promote sugary milk in schools

8) The federal government should not allow sugary milk in school