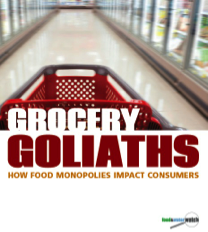 Last month, Food and Water Watch, a group that seeks to ensure that the food, water and fish we consume is safe, accessible and sustainably produced, released a report on concentration in the food industry.  The Executive Summary is posted below.  The full report is available here.

Groceries are big business, with Americans spending $603 billion on grocery products in 2012. Big-box food retailers like Walmart and national grocery store chains now dominate the grocery industry. These mega-retailers are the biggest buyers of grocery products, and they exert tremendous power over food companies and ultimately farmers. This has led to a handful of food companies producing the majority of the products in the supermarket.

This growing consolidation of the food supply is severe at every step of the food chain, from farm to fork. And it impacts not only farmers and food manufacturers, but also consumers in the form of reduced consumer choices and higher grocery prices. Since the Great Recession started, grocery food prices rose more quickly than inflation and wages — twice as fast between 2010 and 2012. At the same time, the largest food, beverage and grocery retail companies pocketed $77 billion in profits in 2012. Nationally, the growing size and market power of the top grocery retailers has had tremendous ripple effects across the food chain. Food & Water Watch examined 100 types of grocery products and found that the top few companies dominated the sales of each grocery item in recent years.