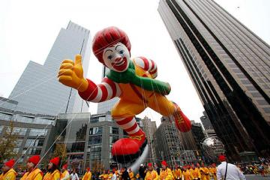 The headlines certainly sounded impressive: “McDonald’s to Scrap Soda From ‘Happy Meal’ Ads” and “McDonald’s Ditches Soda In Happy Meal Menus.”  In a grandiose announcement from the Alliance for a Healthier Generation (an offshoot of the Clinton Foundation), McDonald’s proved once again that it’s not only the world’s fast-food leader, but also the king of spin. This time, Bill Clinton himself was on hand for the nifty photo op with McDonald’s CEO Don Thompson at the Clinton Global Initiative’s annual meeting. Despite the seal of approval from the (mostly vegan) former president, I’ve learned to approach these sorts promises from McDonald’s with skepticism.

And sure enough, when I started asking questions about the pledge on Twitter, fellow food activist Casey Hinds helped me locate this document, which seems to be a draft version of a “memorandum of understanding” between McDonald’s and the Clinton Foundation. I say draft because it contains internal notes, and is no longer available on the Alliance for Healthier Generation website where Hinds found it on September 26. (Oddly, the link to the document is still available, but download it fast.) This line jumped out at me right away:

That sure didn’t sound like what was in the press release, or what headlines seemed to indicate, or what advocates were crowing over. The press release said McDonald’s would “promote and market only water, milk, and juice as the beverage in Happy Meals on menu boards and in-store and external advertising.” In fairness, the New York Times and other outlets – like NPR and the Associated Press – did report that “customers would still be able to buy soda,” but the damage was done.

So what gives? The explanation is pretty simple. McDonald’s cannot make truly meaningful changes to its menu, because to do so could risk losing money. Certainly not at a time when the company is already worried about losing the coveted Millennials market, and when its kid-friendly theme may be losing steam.

Another lost detail was exactly how any promise like this coming from McDonald’s HQ plays out in the 34,000 restaurant outlets around the world or even “just” the 14,000 outlets in the U.S. According to the company, more than 80 percent of outlets worldwide are owned by independent franchise owners, who are increasingly at odds with the mother ship over financial constraints.

Earlier this year, a sampling of owners characterized their relationship with McDonald’s corporate on a scale between 0 and 5 as 1.93, with frequent complaints about high costs and low profit margins. Franchise owners cited McDonald’s “aggressive stance on discounting and promoting its Dollar Menu” as a main source of dissatisfaction. And McDonald’s refusal to pay its workers a living wage has exposed more ugly unrest between outlet owners and HQ.

This all made me especially suspicious of McDonald’s promise with Clinton to “provide customers a choice of a side salad, fruit or vegetable as a substitute for French fries in value meals.” But the fine print says only that McDonald’s will encourage franchises “to make this choice available to customers at no additional charge” and that the company “anticipates” that the majority will do so. Most important is this huge caveat:

Our franchisees are independent business men and women who ultimately determine pricing for all menu items at their restaurants based on many factors, including local market conditions.

This is a very big deal since low prices are obviously a major reason fast food is so popular. Given the economic challenges franchises are already under, why would owners replace fries with salads for free, when vegetables are more labor-intensive, require freshness, and are just plain messy? They won’t, because they can’t.

But really, none of this should have been a surprise. More than any other food corporation, McDonald’s has a long history of deceiving the public with empty promises, often resulting in legal action. Here are a few select highlights:

Also in 2011, McDonald’s claimed to be offering a healthier Happy Meal but nutrition experts Marion Nestle and Andy Bellatti raised serious questions. Then earlier this year, McDonald’s CEO Don Thompson lied over and over at the company’s shareholder meeting, claiming for example, that the company doesn’t market to children, and provides “high-quality food.”

That’s why it was so shocking to see advocacy groups who should have known better applauding this latest public relations stunt and getting quoted in major newspapers such as USA Today and the Los Angeles Times.

And what happened at the Clinton Foundation? Didn’t anybody there bother to read the fine print? Or did they just go along with the charade? Global food corporations like McDonald’s have a long history of using reputable institutions to give public relation stunts like these greater legitimacy.

These hollow agreements can have far-reaching implications for public health, and organizations like the Clinton Foundation should be more wary. As healthy food advocate Nancy Huehnergarth recently noted (even as she acknowledged initially being fooled herself), “McDonald’s has already gotten the headlines and press coverage it desired for this pledge, whether it follows through or not.”

And that was the whole idea.