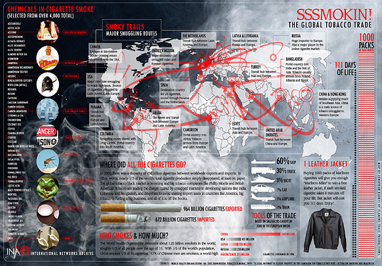 This statement reflects views and recommendations that emerged from a consortium meeting convened by the Center for Policy Analysis on Trade and Health (CPATH) and the Center for Tobacco Control Research and Education (CTCRE) at the University of California-San Francisco on Feb. 19, 2013, in San Francisco, to reinvigorate strategies to advance tobacco control in California and the U.S., and to strengthen public health and medical voices to inform trade policy.

Public health and medical organizations in the U.S. and internationally are increasingly engaged in addressing the nexus between tobacco control and global trade. Trade rules and trade agreements, including present efforts to negotiate the Trans Pacific Partnership (TPP), present challenges to tobacco control, at local, state, and national levels. Tobacco companies have recently accelerated their use of trade rules to attempt to delay and reverse tobacco control measures in the U.S., Australia, Uruguay, Norway, and Ireland. In negotiating the TPP, a new agreement for the 21st century, the United States has the opportunity to be a leader to safeguard public health and reduce the enormous burden of disease related to tobacco use.

The following proposals articulate concerns, goals, and key strategies to achieve them, that were discussed during the Consortium Meeting. Many have been consistently advanced by the medical, health care, and public health communities.

We call on the United States to advance a trade proposal in the Trans Pacific Partnership negotiations that will safeguard public health, advance tobacco control measures that contribute to reducing the enormous burden of disease related to tobacco use, and prevent incursions by the tobacco industry against those measures.

Incorporate reference to the Framework Convention on Tobacco Control (FCTC) in trade agreements. Acknowledge deference to FCTC principles, as an expression of the international consensus on tobacco control, and affirm the right of nations to protect public health from tobacco and tobacco products in the text of all relevant chapters of trade agreements. (Policy Coherence)

Incorporate in the text of each regional and bilateral trade agreement the WTO Doha Declaration on countries’ rights to protect public health. The 2001 World Trade Organization (WTO) Doha Declaration on the TRIPS Agreement and Public Health affirms that WTO members may use “to the full” the flexibilities in the Agreement on Trade-Related Aspect of Intellectual Property Rights (TRIPS) “to protect public health and, in particular, to promote access to medicines for all…” This right can and should be extended to tobacco control measures. (Policy Coherence)

Strengthen the primacy of public health principles. Strengthen adoption and implementation of FCTC recommendations within and across nations to protect the public’s health from tobacco and tobacco products.

2.  The TPP must not undermine the right and ability of participating countries from exercising their domestic sovereignty in order to adopt or maintain measures to reduce tobacco use and to prevent the harm it causes to public health.

Remove investor-state dispute settlement (ISDS) provisions. Eliminate the rights of tobacco and other corporations to contest governments’ domestic sovereignty over public health and other policies, and to sue nations directly for financial damages through the global trade arena.

3. We must set trade policy through a transparent process that involves the public.

Trade agreements and trade rules which may affect public health, including preventing disease and death from tobacco, should be discussed and debated publicly, and in Congress.

Include effective public health representation in setting trade policies at the national, state, and local levels.

We further propose that advocacy for these goals can be strengthened by identifying and communicating with related constituencies concerned with trade: Labor, environment, access to medicines, sustainable agriculture, sustainable economic development, internet access; policy-makers at the local, state and national levels.