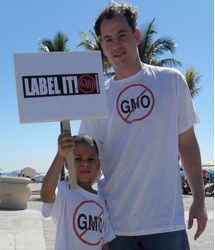 Cross posted from Appetite for Profit

Last week I wrote about how the No on 37 campaign – the California ballot initiative that would require labeling of GMOs foods – is relying on experts with questionable credentials to do its bidding. Over the past few weeks, two expert reports have emerged from the No campaign that also warrant closer scrutiny.

The first, entitled “California’s Proposition 37: Effects of Mandatory Labeling of GM Food,” was co-authored by University of California at Davis professor Colin Carter and published in the newsletter of the University of California Giannini Foundation of Agricultural Economics. It’s not clear if the report was funded by the No campaign since the article doesn’t say one way or the other.

Regardless of the financial support, the article contains at least one glaring error that’s big enough to call into question the entire piece, along with the authors’ credibility. And right in the first paragraph: “The California initiative would implement a zero-tolerance policy for accidental presence of small amounts of GM substances.” In fact, Prop 37 specifically focuses on the deliberate use of GMO ingredients and exempts accidental occurrences. (This can happen due to drifting of GMO seeds to organic or non-GMO crops.)

To be clear, Prop 37 does not require labels on foods that were unintentionally and/or unknowingly contaminated by genetically engineered seed or food. If you don’t believe me, read the language yourself.

Much of the article is based on this erroneous assertion. For example, the authors complain about how farmers could not adhere to this standard; that the standard is higher than that of other nations, and even higher than the U.S. organic standard. But none of this is true, which makes reading the entire article very confusing.

Parke Wilde, a professor at the Friedman School of Nutrition Science and Policy at Tufts University, recently blogged about Carter’s error and how the Oakland Tribune picked up on it, furthering the confusion about what initiative requires.

In his post entitled, “Incorrect reports say that California’s Prop 37 has zero tolerance for accidental GMO content,” Wilde says that even when he emailed Carter about the matter, he “didn’t really back up this claim that the initiative takes a zero-tolerance position on accidental contamination.” So a University of California professor gets the basic facts wrong and then when asked about it by a colleague, evades the question. Not exactly a trustworthy source.

The article comes to other exaggerated conclusions such as “certified non-GM processed food products will virtually disappear from food stores” but without any actual analysis or scientific basis for such a dramatic claim. The article contains no citations; presumably this is the format of the publication, but it makes understanding the basis for the authors’ conclusions almost impossible.

A second report also from University of California at Davis professors makes similarly unsubstantiated claims about how non-GMO foods would just disappear from the market, along with wild predictions about increased food costs.

That article, entitled, “Proposition 37 – California Food Labeling Initiative: Economic Implications for Farmers and the Food Industry if the Proposed Initiative were Adopted,” is co-authored by UC Davis professors Julian Alston and Daniel Sumner. According to the report, “The work for this project was undertaken with partial funding support from No on 37.” The Los Angeles Times reported that the No campaign paid the authors “at least $30,000.”

Alston has previous ties to Monsanto, according to this Sacramento Bee article from 2004, which explains the relationship:

In July 2002, UC Davis farm economics professor Julian Alston found a patron in the private sector: Monsanto, one of the world’s five largest crop biotechnology firms. The official announcement came in the form of a letter. “Dear Dr. Alston,” it read. “Please find enclosed a check for $40,000 that represents an unrestricted gift in support of your research program.”

That same in-depth story (well worth the long read) paints UC Davis as a research incubator for Big Biotech: “You name it, and biotechnology companies help pay for it at UC Davis: laboratory studies, scholarships, post-doctoral students’ salaries, professors’ travel expenses, even the campus utility bill.”

The No on 37 campaign released the recent report with this dramatic headline: “UC Davis Professors of Agricultural Economics Release New Report that Shows Proposition 37 Will Increase Costs for California Farmers and Food Processors by $1.2 Billion.” The report makes a number of other claims, mostly based on questionable assumptions. As for the $1.2 billion in increased food costs, the figure assumes food makers would substitute non-GMO ingredients, which the authors base upon what happened in Europe upon mandatory labeling. However, there is no evidence to suggest the food industry will respond the same way here. The European Union has a much longer history of opposing GMOs then we do in the U.S. so it’s really not a fair comparison. At the very least, we just don’t know. Proposition 37 only requires labeling, not reformulation.

Once again, most of the authors’ additional conclusions are based on this one faulty assumption. For example, they claim that passage of Prop 37 and the ensuing “complete switch to GE varieties” would cause harm to farmers and the environment, result in high compliance costs for industry, as well as place California agriculture at a competitive disadvantage. But these are just the authors’ speculative opinions, based on faulty assumptions.

Moreover, this report is not published in a peer-reviewed publication; in fact, it’s not published anywhere, except on the No on 37 website. And while the No campaign made sure we knew the two authors are UC Davis professors (it’s mentioned several times on this page) apparently the authors needed to include this disclaimer next to their bios: “Titles are for identification only. The report is the authors’ independent work and not a product of the University of California.”

So both the authors and the No on 37 campaign gets to have it both ways. They can claim the University of California affiliation without making their work a product of UC. Whatever the affiliation or funding source, both of these reports should be dismissed as merely the unsubstantiated opinions of a few academics, as opposed to reliable scientific analysis backed up by peer review.