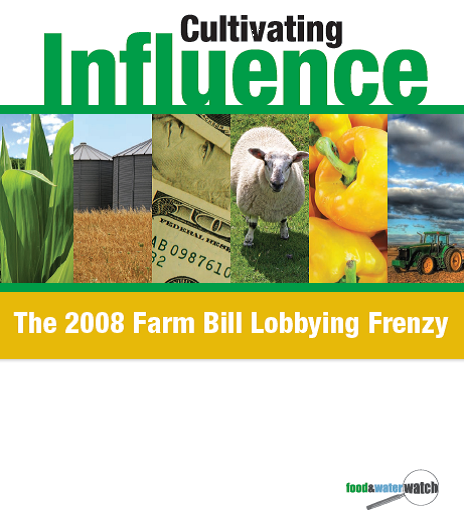 The legislative process of Congress serves as a lens to magnify the ways that corporate power and money shape policy. As the U.S. House of Representatives considers the Farm Bill passed by the Senate last month, several new reports provide details of how corporations ensure that their needs take precedence over the well-being of the American people.

Cultivating Influence The 2008 Farm Bill Lobbying Frenzy released earlier this month by Food and Water Watch, a non-profit group that works to ensure that the food, water and fish we consume is safe, accessible and sustainable, documents the scope of lobbing for the 2008 Farm Bill, the last re-authorization Congress approved.  The found that:

More than 1,000 companies, trade associations and other groups spent an estimated $173.5 million lobbying on just the 2008 Farm Bill. As shown in Table 1, almost half was spent on farm policy…. During every day that the 100th Congress was in session in 2007 and 2008, special interests spent on average $539,000 lobbying on issues covered by the Farm Bill.

The 2008 Farm Bill generated more than $300 billion in federal spending over five years.  The report shows that some corporations got generous payoff for their lobbying.  Weyerhaeuser, the timber company, for example, spent $1 million to lobby successfully for a tax benefit that netted them $180 million.

The 2013 re-authorization of the Farm Bill is attracting no les corporate interest.  A report from Reuters documents the role Monsanto and Dow Chemical are playing to win new benefits for biotech seed companies.  If successful, reports Reuters, their efforts “would severely limit U.S. oversight of genetically modified crops.”  One proposed measure that the House will vote on soon would allow biotech crops to be planted even if courts rule that they were approved illegally.

Earlier in July, 40 food businesses, retailers, family farmers and other group send a protest letter to leaders of the House Agriculture Committee calling on them to remove this and other provisions that limited government oversight.  The letter, sent by the National Family Farm Coalition, the Union of Concerned Scientists, the Center for Environmental Health and other groups noted that “The Farm Bill riders together would eliminate the much needed review of these novel crops, forcing hasty approvals in advancing the chemical industry’s interest in selling their products.”

Another letter, sent in June to all members of Congress and signed by more than 70 public health, nutrition, food  and environmental scientists and activists  identified other concerns with the proposals now being considered by the House:

We are deeply concerned that [the proposed bill] would continue to give away subsidies worth tens of billions of taxpayer dollars to the largest commodity crop growers, insurance companies, and agribusinesses even as it drastically underfunds programs to promote the health and food security of all Americans, invest in beginning and disadvantaged farmers, revitalize local food economies and protect natural resources. We strongly object to any cuts in food assistance during such dire times for so many Americans. …When it is your turn to vote, we urge you to stand up for local and healthy food and nutrition programs and to support equitable and fiscally responsible amendments that will protect and enhance public health and the environment while maintaining a reasonable safety net for the farmers who grow our food. More than ever before, the public demands this. Come November, they will be giving their votes to members of Congress who supported a healthy food and farm bill that puts the interests of taxpayers, citizens and the vast majority of America’s farmers first and foremost.”

What’s likely to happen next?  According to Tom Philpott, a food policy journalist and farmer,

“The bill is now stalled in the House, in danger of being buried by right-wing backbenchers intent on even deeper food-aid cuts. If the House doesn’t vote on it before the August recess, the most likely outcome is an extension of the 2008 bill—and the 2013 Congress will have to start the farm bill process from scratch. Let’s be blunt: If that scenario plays out, no matter how the November elections go, we’re quite likely to see an equally or more dismal bill emerge next year.”