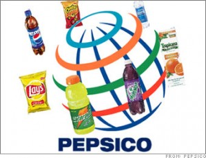 Cross-posted from Appetite for Profit.

When I ask people to name the largest food company in America, most don’t realize the answer is PepsiCo. You may just think soft drinks when you hear the name, but PepsiCo actually owns a dizzying array of food and beverage brands across five massive divisions: Pepsi-Cola, Frito-Lay, Gatorade, Tropicana, and Quaker Oats. As I recently told CNBC for their documentary, Pepsi’s Challenge, perhaps the leading maker of sugary drinks and salty snacks should bear some responsibility for America’s bad eating habits.

To examine the company further, I ask in a lengthy article just published online in the City University of New York Law Review, “PepsiCo and Public Health: Is the Nation’s Largest Food Company a Model of Corporate Responsibility or Master of Public Relations?”

The article describes how PepsiCo utilizes an array of public relations maneuvers to convince Americans to keep buying its products, despite copious health advice to the contrary. Moreover, PepsiCo engages in lobbying and other underhanded behavior that defy its self-proclaimed “Performance with Purpose” image. These tactics include:

Throughout the article, I show how PepsiCo uses deliberately vague language in its annual report and other documents in which the company claims to be a responsible corporate citizen, thereby making evaluating such claims impossible. We cannot trust PepsiCo or any other food company to “do the right thing” when it comes to fixing the mess they got us into in the first place.