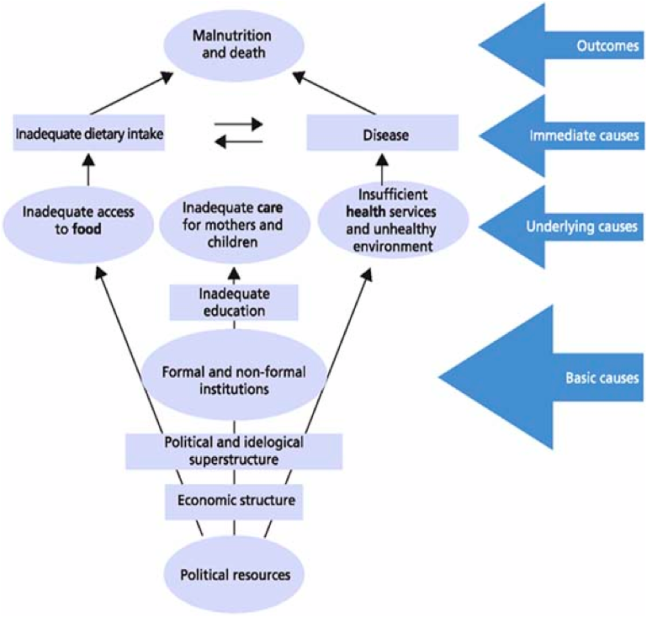 On February 15, Marion Nestle, a public health professor at New York University, spoke on corporate influences on food policy at a meeting of the NGO Working Group on Food and Hunger. Nestle proposed food insecurity as one of the main issues around corporations and food policy for 2012, arguing that the main thing we can do to combat food insecurity is address its root causes. “There’s plenty that can be done at the local level if not at the international level, but work on the root causes, all you public health people,” she urged.

Nestle referred to UNICEF’s conceptual framework for the causes of malnutrition in society (Figure 1) to emphasize that food insecurity stems from social issues, not just from a lack of food. Lack of food is the end problem, but dealing only with that lack does not solve the root causes of food insecurity. According to Nestle, in order for everyone on the planet to be adequately nourished, we must create income equity and political stability, invest in sustainable agriculture and education, empower women, ensure access to clean water and safe food, and promote breastfeeding.

Some food and beverage corporations seek to position themselves as part of the solution to the problem of global food insecurity, marketing fortified food products in developing countries to target under-nutrition.

For example, European consumer-goods corporation Unilever produces food and beverages, among other products. Under “Sustainability” on the Unilever website, you can read about how the corporation’s “brands can play a role in tackling under-nutrition and many of [its] products already make an important contribution to the micronutrient intakes of hundreds of millions of people worldwide.” These products include fortified margarines, instant porridges, powdered drinks and snacks, and instant hot school meals. American food processing company H.J. Heinz is also investing in micronutrients in the name of sustainability. According to its website, Heinz has been a pioneer in supporting the development of micronutrient powders, provided in convenient, “single-serve sachets.”

While such products do indeed address nutrient deficiencies, according to Nestle, “these efforts are about products, not food.” And in the words of Dr. Alfred Sommer, dean emeritus of the Johns Hopkins Bloomberg School of Public Health, “Nutrition can only be sustainable if people ultimately pay for it. Nutrition could stop being a program when governments change priorities.” So, while fortified foods are important suppliers of emergency nutrients, they come at a price. Rather than addressing root causes of food insecurity, fortified foods are marketable products that must be purchased. People suffering from food insecurity will have to rely on government programs or charitable donations to access fortified foods, instead of benefitting from sustainable solutions to undernourishment.

In a 2010 article in the American Journal of Public Health entitled, “Can the Food Industry Help Tackle the Growing Global Burden of Undernutrition?” Derek Yach et al argue that, yes, food and beverage corporations are ideally positioned to address under-nutrition. According to the authors, corporate business expertise, distribution capacity, and product development capabilities are all vital components of successfully combating problems of food insecurity. (It is, perhaps, important to note that Yach, a former WHO health official, is now a senior vice president at PepsiCo.) True, corporations have resources and expertise that could have a huge impact on food insecurity, but would they be able to use this expertise to address the root causes?

In his 2010 Wall St. Journal article, “The Case Against Corporate Social Responsibility,” business professor Aneel Kanmani corroborates Nestle’s argument: “The fact is that while companies sometimes can do well by doing good, more often they can’t. Because in most cases, doing what’s best for society means sacrificing profits.” In our economic system, a corporation’s end goal is always to make a profit, and profit comes from products. And products, no matter how healthy, can never address the inequality that is the root cause of food insecurity.”The goal of the company is to make a profit. It’s really that simple,” Nestle said in her presentation. And, as she argued with co-author David Ludwig in a 2008 Lancet article, “In a Western-style capitalistic economy, food corporations, like all corporations, must make the financial return to stockholders their first priority. Wall Street places corporations under great pressure not only to be profitable, but also to meet quarterly growth targets… Far greater profits come from highly processed, commodity-derived products.” Nestle sees an irreconcilable conflict between highly processed products and public health, even if these products contain essential nutrients.
Image Credits: